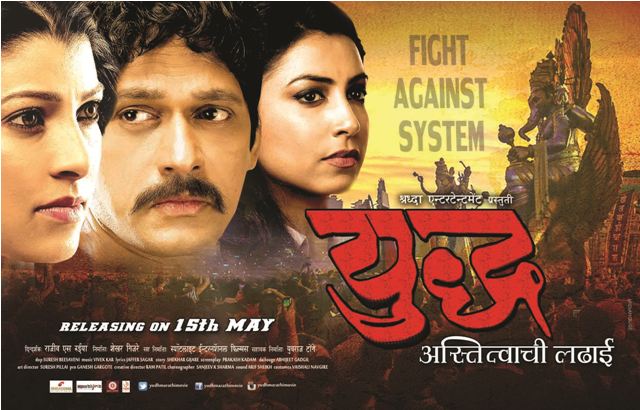 Marathi movies will add yet another feather to its cap with the release of “Yudh- Astitvachi Ladai,” which will inspire the youth to fight against the system. The music of this inspiring movie was launched today in Mumbai.

Yudh- Astitvachi Ladai is being directed by Rajiv S Ruia and produced by Shekhar Gijare. Previously Rajiv has directed Hindi movies and it is with this motivating movie, he will be foraying into Marathi movies. The star cast of this movie includes Rajneesh Duggal, Sanjay Jadhav, Rajesh Shringarpure, Tejaswini Pandit, Kranti Redkar, and Varsha Usgaokar. The movie will reflect the state of society and politics and the journey of a disciplined man who will fight against the system.

Yudh- Astitvachi Ladai will see music composer Vivek Kar and lyricist Jaffer Sagar coming together to create music which is not just bold but also fearless and feisty. Vivek choose the musical instrument ‘dhol’ to create zesty beats in accordance with the story line and to introduce the protagonist. A brilliant job has been done by both and it can surely be predicted that the music of Yudh- AstitvachiLadai is already a super hit.