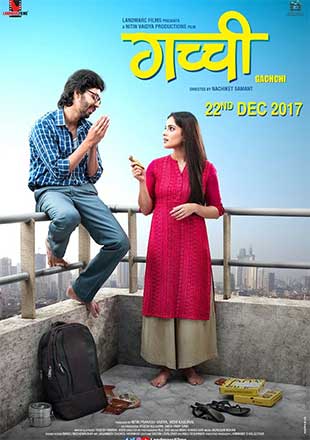 Synopsis: The M Town is coming with one film to the other and the latest to find here is the upcoming movie called Gachchi which means terrace. The film is directed by Nachiket Samant, while it is produced by Nitin Prakash Vaidya and Vidhi Kasliwal under their own banners – Nitin Vaidya Productions Film and Landmarc Films, while the story is carried out by Yogesh Vinayak Joshi. The film is releasing on the eve of Christmas on 22nd December 2017 and the music is carried out by Murugan Mohan whereas the the story is given by Yogesh Vinayak Joshi. The star cast of the film include Priya Bapat, Abhay Mahajan, Anant Jog, Asha Shelar, Mayureshwar Kale, Siddhant Samant, Swapnaneel Jaykar and Tushar Tengale in the lead roles.

The Sound Design has come from Manoj Mochemadkar, while the cinematography (DOP) is carried out by Riju Das and the Editor is Ninad Khanolkar. The film has been co-produced by people including Yogesh Kulkarni, Smita Vinay Ganu and Laxmikant D Kalgutkar. Now talking about the movie, it happens to be a  drama movie, which has story of a couple and the way their life undergoes a change in the passing time. Now, if you look at the film it will give you a rich content to enjoy this festive time along with the new year eve. So, what are you waiting for, go catch the film once it hits the screen and in the meantime you are free to comment on the same and do let us know about what you feel about the same. Lastly don’t forget to get tuned with us to give us the best.