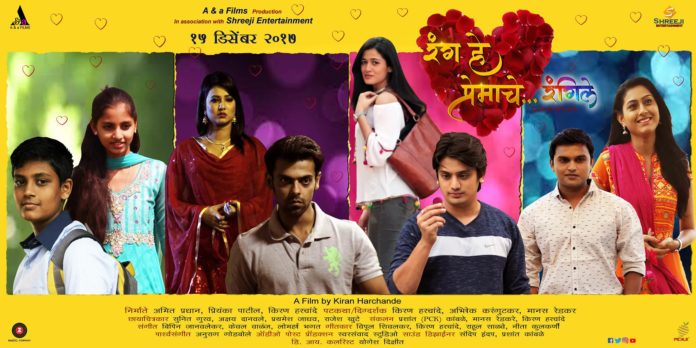 Studio : A & a Films, in association with Shreeji Entertainment

Synopsis: The M Town seems to be embarking with one film to the other, which include the one called Rang He Premache Rangeele. The movie has been produced by Amit Pradhan, Priyanka Patil, Kiran Harchande under their own banner called A & a Films, in association with Shreeji Entertainment. The film is known to have an interesting star cast, which include Prathmesh Dongre as Shree, Akansha Mahadik as Bhakti, Kunal Devalkar as Maddy, Siddhi Dalvi as Grisha, Rohan Gujar as Prakash, Sara Shrawan as Shabnam, Pankaj Khamkar as Ajay and Reshma Shinde Samiksha in the lead roles. The film is releasing on 15th December 2017.

The music is given by Bipin Janvalekar, Keval Walanj, Lomaharn Bhagat, while the lyrics have been added by Vipul Shivalkar, Kiran Harchande, Rahul Salave and Neena Kulkarni. The singers of the movie include Keval Walanj, Vishal Jagtap, Datta Mestri and Amruta Dahivelkar. The cinematography is carried out by Sunit Gurav, Akshay Danvale, Prathamesh Jadhav, Rajesh Khute, while the film’s genre is romance and drama. Now, talking about the film it happens to be a love story and the deals mainly the drama attached to the love story found in between two families that include rivalry and many more things that can be found in any typical old masala Bollywood film.Stay tuned to know more about this film and others only with us and yes don’t forget to share your views and ideas about the movie and return with your own words. Do comment about this film and others in the comment section.