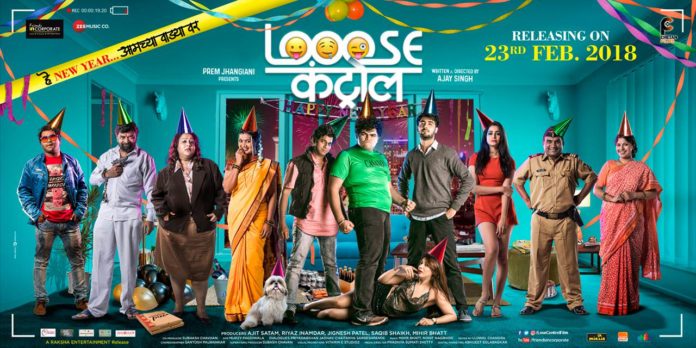 Synopsis: The M Town has a few movies lined to be released in the coming future. Loose Control is one of the film that has been directed by Ajay Singh , while it has Akshay Mhatre, Manmeet Pem, Shashikant Kerkar, and Madhura Naik in the lead roles apart from having Bhalchandra Kadam, Shashank Shende, Namrata Awate, Prajakta Hanamghar, Kushal Badrike, Aarti Solanki, Bunty Chopra, and Binod Rai Bantawa. The genre of the film is comedy, while the story is given by Ajay Singh. The dialogues comes from Priyadarshan J and Chaitanya S, while the music is composed by Mihir Bhatt; Rohit Nagbhide and the lyrics are carried out by Sujay Jadhav, and Vaibhav Deshmukh. The playback singing is carried out by Suzanne D’ Mello, Amit Mishra, Angela Almeida, Rohit Raut, Jasraj Joshi, and Adarsha Shinde.

Now talking about the plot of the film it deals with human desires, emotions and actions which come along the comedy element. The film Loose Control happens to be an amusing take over the colossal mess that seemed to be over our skewed ideas along with the actions that can lead us to. It has three engineering students who see the life with their own perspective taking a roller coaster ride of the variety of human emotions that come along with the span of New Year eve. So, what goes in this comedy and drama film would be interesting to catch when it finally hits the screens. The film has loads to offer to the audience, wait and watch as it has created a good amount of buzz in the media.