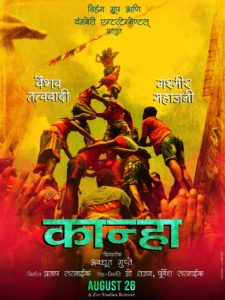 Kanha is an upcoming movie in M Town, which is directed by Avdhoot Gupte and produced by Pratap Sarnaik along with Joe Rajan & Purveh Sarnaik. The film is produced under the banner of Zee Studio in association with Vihang Group & YoungBerry Entertainment.

The film is based on the festive event called Dahi Handi, which is very much popular in the state of Maharashtra. The film discusses about this festival and the way it has become an integral part of the life of Marathi Manoos in the state.

The film is all set to hit the theatres on 26th August, and the promos released earlier are getting a decent response over the social media. Nothing much has been shared about the movie by the makers and thus the movie would be a surprise to the audience of M Town. Let’s wait and watch for the same and mind it was presented by none other than the Maharashtra Chief Minister Mr. Devendra Fadnavis. Stay tuned to get in touch with the film.