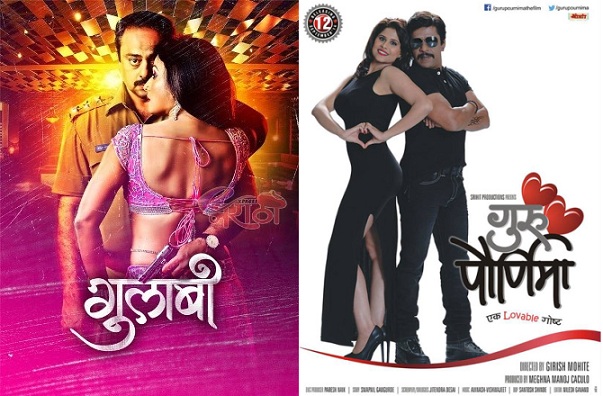 With Sai Tamhankar and Upendra Limaya in the lead, Guru purnima promised a huge turn out on the opening day and it did come true. Gurupurnima , attracted a good number of audience to the movie halls on its first day and collected a good sum. The other movie released alongside was Sachin Khedkar and Bhojpuri actress Pakhi starrer Gulabi . Lacking slightly on the star quotient, Gulabi is about a bar dancer and her struggle to save her job from an adamant police officer. The subject, though different has apparently not gone down well with the audiences and the film registered a lower number of viewership in comparison with Gurpurnima.

While Gurupurnima collection predicted 30 – 40 Lakhs in its first day, Gulabi brought in 25 Lakhs on Friday. It turned out that the former was preferred not only by youngsters but also by the older audiences. Gulabi received a lukewarm response even in cities like Pune and Mumbai where the viewership of Marathi films is much higher than other cities. In smaller cities like Nagpur and Nasik, GuruPurnima attracted audience owing to the popularity of the actors. Also, being a love story and a masala entertainer, the film’s collections went up on the weekends. On its first weekend , it collected 50 Lakhs. The film is expected to catch up in the coming days and also to remain in the theatres further than this month.

There was a drop in the collections of Gulabi in the weekends. As the word of mouth about Guru Purnima was good, it evidently affected the former’s collection.