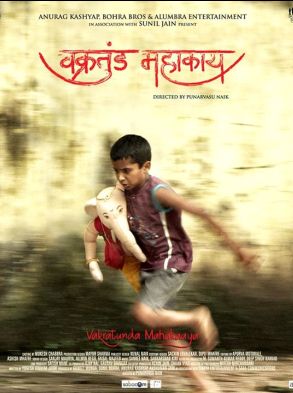 Eminent filmmaker from the Bollywood, Anurag Kashyap is about to make his debut into the arena of Marathi films, with producing the forthcoming movie Vakratunda Mahakaya. It is definitely a point to cheer upon if more and more such eminent personalities come to the aid of the regional films.

Anurag shall team up with Nitesh Rane and Guneet Monga as his co producers. Rane happens to be the son of the eminent political personality Narayan Rane.

The film gets directed by Punarvasu Nayak and the plot revolves around a terrorist attack that was attempted during the Ganesh Chaturthi, Maharashtra’s prime festival. People keeps waiting for this festival to arrive and on its arrival, people in Maharashtra celebrates with all of their hearts.   Unfortunately, this auspicious festive occasion that is celebrated with people from all communities and religions participating in it heartily unfortunately turns out to be the right moment for the terrorist to “gift” the people of Maharashtra with a presentation stained in blood. The audience has to catch it up upon its arrival in the cinema to explore how did the people of Maharashtra managed to escape with the grace and blessing s of Lord Ganesha.

Once asked upon the reason as to why to make it for the Marathi films, Anurag stated that his joining to the squad was only after he was convinced with the plot and appeal within it and it is simply to consolidate the trust of the people upon the project. Plus, having high regards on the standards of the contemporary Marathi works, he had planned to be a part of it at some point of time.

As heard of the team of the producers, the movie had also got selected to get screened in the Film Festival at Melbourne for the ongoing year.