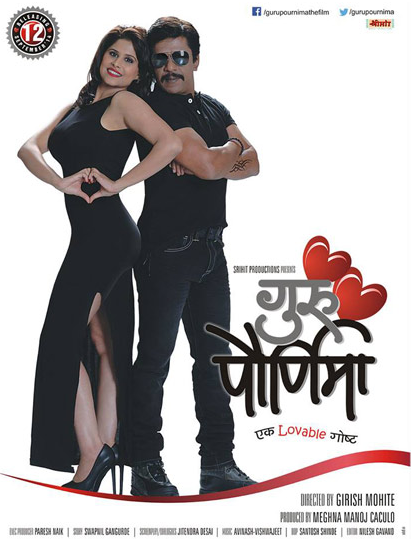 Guru Purnima is an upcoming Marathi movie that is expected to be released this 12th September, 2014. It is directed by Girish Mohite and Meghna Caculo is its producer. Shrihit Production’s Marathi movie poster of Guru Purnima was unveiling ceremony took place at Caculo Mall’s Citrus hall, located in Panaji. This movie stars Upendra Limaye, Sulbha Arya, Saie Tamhankar and others. The script is written by Swapnil Gangurde. Screenplay of the movie is by Jitendra Desai. It is a romantic drama, which according to the director is sure to connect well with the young and elderly audiences. The poster has already won raving reviews from its fans and is fast making it to the popularity ratings and also being most viewed.

The poster’s unveiling ceremony was attended by the leading star cast and others. Santosh Shinde is its cinematographer, while Bela Shenda is the lead singer, who is credited to have sung very well in the movie and the songs are expected to be a big hit this year and to rule the chartbusters. Manoj Caculo, the CMD of Caculo Group earlier had announced that this movie would premier likely at Singapore.

Most of the scenes of this movie was shot in the exotic locations of Goa. At the poster unveiling occasion, Bella is said to have entertained the guests with several verses of the latest songs from the movie. This is an exciting romantic movie that is sure to be enjoyed by the audience thoroughly. The makers are crossing their fingers and expect it to have a grand release and opening at the box office. The poster looks very much appealing and interesting, which is what compels the general audience to guess what the movie would be all about. Going through the reviews of the movie can really pipe up the interest of the audience further.