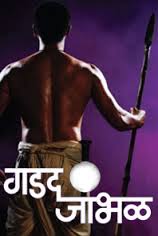 Gadad Jambhal is a forthcoming Marathi movie that is expected to release this summer. The story has been written by Sandeep Naware. The leading star cast of the movie is Milind Shinde, Sayaji Shinde, Hemangi Kavi, Santosh Juvekar, and Kavita Magare – Malla. It has been directed by Sandeep Naware and produced by Vijay Barase and Ankit Magare.

This movie is said to be based upon a particular tribal community living, the lives of whose are darkened due to superstitions. The movie according to the director is actually a love story that develops on Adiwasi background. The whole story revolves around lives of the orphan Aamsha, who is an ordinary tribal boy, Bhangi, his lady love and Narsu, the wicked chieftain. Moreover, it also tends to emphasize the village inhabitants’ miserable living condition who becomes victims of superstitions that are forced upon them by Narsu.

Santosh Juvekar, the romantic Marathi actor is set to draw the character role in this upcoming movie, which stars Milind, Hemangi Kavi and others. Apart from this, Santosh is stated to reveal his newly developed muscular body in this movie, much to the thrill of his fans.

A glitzy muhurat was arranged along with song recording. The banner under which this movie is presented is R.J. Production House Private Limited. The muhurat was held at Swarlata Studio and began with song recording. The song had been given voice by Aarti Ankalikar-Tilekar, the classical singer and Roopkumar Rathod. Music for the movie has been composed by Sachin, Shailesh and Sandeep, while lyrics are penned by N.D.

The first look poster released is quite interesting and also impressive enough to make viewers to anticipate the release of this movie. It is only time that will tell how the movie would fare at the box office and how it will steal the hearts of the viewers.