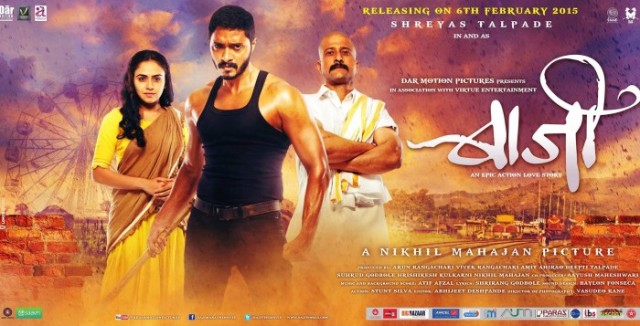 A superhero tale from the folklore and inspirations from many Hollywood films. That is Shreyas Talpade starrer Baji all about. What is left for the audience is the message that Marathi cinema’s first attempt at Superhero flick fails to impress even the ordinary audience. But the film surely is not a complete failure. But its loopholes are so massive that you ignore to appreciate the positives.

The biggest positive about the film is its performances. Shreyas Talpade as the superhero and Jietndra Joshi as the villain are both highly impressive. Shreyas carries the entire film on his shoulders while Jitendra joshi’s performance is so good that it can make up for the loopholes in the film. The love story of Shreyash with Amruta Khanvilkar is also adorable. Where the film misses out is it’s long stretched script that merely keeps you interested. The plot consists of the Baji , the superhero of the village who is an intrinsic part of the village’s folklore fighting all odds and villains in the village to save the common masses. Jitendra Joshi is the negative character who assumes larger than life dimension at tiem in the story. Shreyas is both the hero and the anti hero just like most other superhero flicks which is the world has seen.

The most unbearable part of the film is its clichéd images and stories of the conventional nature. Though the concept of superhero is not new but what the audience expected when a Marathi superhero flick was announced was a novel treatment to it unlike the previous films. Disappointingly, the film is very conventional in its scenes and sequences where you will also be reminded of the popular Tv serial Shaktiman. The Hollywood hit series National Treasure is also present in Baji in bits and parts.

The film has been tampered by sloggy editing that results in the film going on for complete three hours. The songs though melodious are not placed well in a faulty script. The plot is so predictable that veen children can guess the end. Nikhil Mahajan , the director , though pulls off a fine job but fails to impress in a film that had high expectations. Shreyash returns to Marathi film after a gap of seven years. He lives upto the expectations with both his hero and anti hero acts but as said earlier, it is just another superhero film that can be easily missed unless you are a Shreyas Talpade fan.