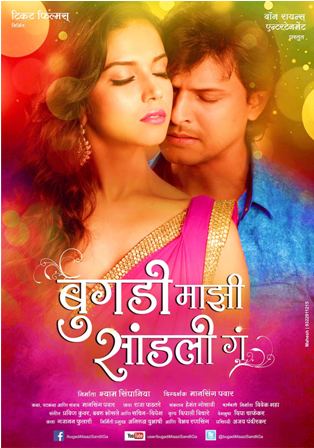 Bugadi Maazi Sandli Ga is regarded to be an upcoming Marathi movie that has been produced by Shyam Singhania under the banner of Ticket Films and Von Ryans Entertainment. The director of this movie is Mansingh Pawar. The leading star cast of this movie is Manasi Moghe, Kashyap Parulekar, Deepa Chaphekar, Mohan Joshi, Ila Bhate and Ramesh Bhatkar. The dialogues and story screenplay is written by Mansingh Pawar. Music for this movie has been composed by Sachin-Dipesh, Babru Khosle and Pravin Kumar. Cinematography has been taken by Raja Fadtare and Choreography by Dipali Vichare. The first poster of this action packed drama has been appreciated well by the Marathi movie audience and has got numerous likes.

The music of this movie was released recently with nine songs all of which are really melodious and sure to capture the heart of the movie goers. Moreover, the poster is also very much eye catching with the leading lady being in Laavni pose and at entrance of a hall, where the music film’s has been released. The ceremony in regards to its music launch was a simple and sweet affair without any celebrity to cut the ribbon. The produce was doing a fabulous PR job on this occasion and maintained that any celebrity was not called, since they felt that the press, attendees and the media are the celebrities.

This movie according to the director is a musical drama in the real sense and the nine songs do complement to the movie. Out of all the songs present, six of them are laavnis, since the movie glorifies about laavnis and the performers. This is because, the movie makers have been assuming that this specific traditional dance form have been recently getting raw deal. Hence, through this movie, they will promote Laavni and make it popular once again.