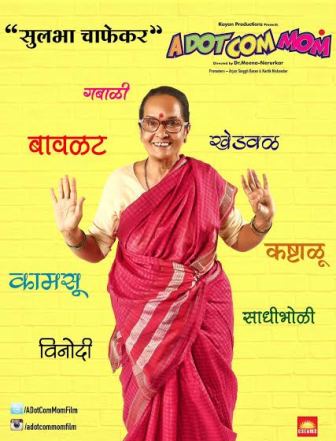 The M Town is not short of good movies and the Marathi movie called Dot Com Mom, which is produced under the banner of Kayan Productions in association with Kalabhavan. The film is directed by Dr. Meena Nerurkar who is also one of the producers of the film. It has an interesting star cast Sai Gundewar, Apurva Bhalerao, Vikram Gokhale, Dr. Meena Nerurkar, Vijay Chavan, Prashant Tapasvi, Deepti Lele, Ravindra Khare and Manasi Karandikar in the leading and supporting role. The story and screenplay is carried out by Dr. Meena herself. The music of the film is composed by Ashok Patki, Pratik Shah and Sudhir Phadke.

The story of the film deals with a simple middle class mother from a small town and unlike any other middle class mother she has worked hard to bring up her son. Her smart son then went to the US and then turns out to be a successful person professionally.

He then calls his parents there in the US to share the happiness but the mother in the family is unable to cope up with the fast and modern lifestyle of the US. The daughter in law in the family simply keeps her away in her house soon the time comes when the son want his parents to return to India. So, what happens next is interesting to catch once the film finally hits the theatre.