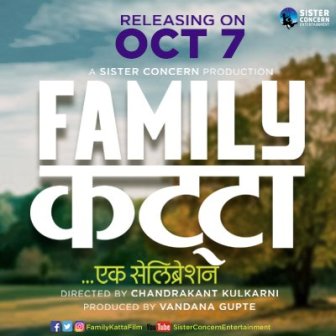 The upcoming Marathi movie Family Katta happens to be a comedy family drama, which is directed by Chandrakant Kulkarni. It is produced by the duo actress and singer Vandana Gupte and Rani Verma who have produced under the banner called Sister Concern. The makers have recently released the teaser of the movie, which happens to be becoming viral among the Marathi movie audience. The film is releasing on 7th of October 2016, while Prashant Dalvi is the man who carried out a couple of things for the film, which include writing the story, doing the screenplay and jotting down the dialogues for the same.

The film happens to be a family drama, which showcases the people and their relationships within the family along with the life after getting into misunderstandings. The story of the film has the Sabnis family at the center and you find the members of the family staying away from each other. The film has a talented star cast, which include Dilip Prabhavalkar and Vanadana Gupte to name a few who in the movie are celebrating their 50th wedding anniversary in the family that calls everyone in the family. So, stay tuned at this site to get the right glimpse of the movie along with getting other details as well.