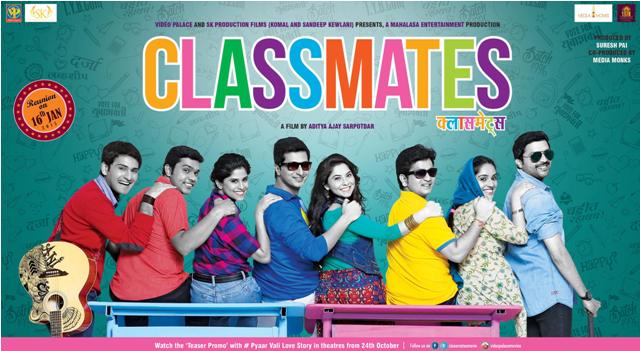 Aditya Sarpotdar directed, Classmates is a thriller drama replete with elements of suspense but at the same time there is oodles of romance and fun. Sai Tamhankar and Ankush Chaudhary play the leads in this campus drama. Sachit Patil and Sonalee Kulkarni are also seen playing pivotal roles. It is an official remake of the 2006 Malayalam Block Buster of the same name. The story set in a college campus in the year 1995 wherein Satya ( played by Ankush Chaudhary ) , Appu ( Sai Tamhankar ) and Rohit played by (Sachin Patil) and Aditi ( played by Sonalee Kulkarni ). Happy friends of one time come under the same roof for a reunion after decades. What secrets would unfold as the one time friends now meet as strangers?

The college life of the batchmates unfolds in the flashback sequence. Aniruddh ( played by Sidhrath Chandekar) was a talented young musician who meets with a sudden mysterious death. It was his wish to create a department of music in the college. On the day of the inauguration, Satya reappears shrouded with mystery. The story unravels itself with suspense and action. Does the Satya’s disappearance have some relation to Anirudh’s death ?

Classmates is replete with humor and fun of college years. There is love and romance and music winds memories magically. Old sentiments and grudges come to fore in the reunion. And love once again blossoms between Appu and Satya who were separated by circumstances. The reunion, though rekindles the love between the two , there is a mystery that has to be unfolded before the matters come to rest.

Director Aditya Sarpotdar had a difficult script for execution. He succeeds at bringing out the humour and suspense effectively. Sai and Ankush add depth to their characters with their acting. Performances by Sachit Patil, Sonalee Kulkarni and Pallavi Patil are also realistic. The music swings between the time of 1995 and the present. The flashback sequence would not have been so nostalgic had there not been the magical music composed by Amit Raj, Troy , Arif. Kudos to the script writer for coming up with a story that has varied shades within it. Although a suspense thriller, the film is not just a one time watch. It is entertaining and thrilling and is bound to catch up with the youngsters.

A family entertainer and a campus love story , Classmates has given the right start for the year 2015 for Marathi movie lovers.