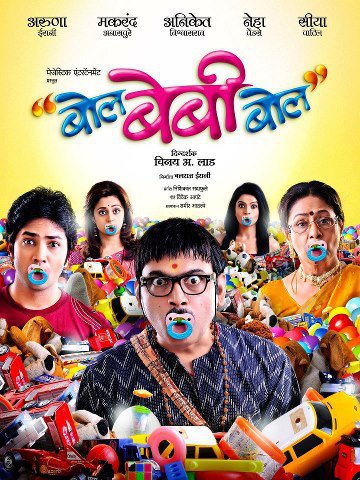 Bol Baby Bol is an upcoming Marathi movie that is set to be released soon. The producer of the movie is Balraj Irani and it has been edited and directed by Vinay Lad. The star cast is Aniket Vishwasrao, Makrand Anaspure, Siya Patil and Neha Pendse. The Marathi viewers would be able to see Aruna Irani back in action in a Marathi movie after 16 long years! The executive producer is Suresh B Sawant and story has been written by Rajan Agarwal. The screenplay is done by Vinay N. Laad and Rajan Agarwal. The lyricist is Vivek Apte, music by Nishikant Sadaphule, Cinematography by Sameer Athaley, Choreography by Dilip Mistry and Dialogues by Sanjay Belose.

The movie is being produced under the banner of Majestic Entertainment and the shooting as of now is stands completed, ready to be released. It is completely a comedy film that is expected to make the viewers to laugh out loud throughout the movie.

Balraj Irani, brother of Aruna Irani is the producer and is reported to have worked earlier with Boney Kapoor as executive producer. The movie is all slated to be released this 6th November, 2014 and is expected to be a box office hit, because of the star presence and great content. Recently at the grand music launch of the film, Sridevi, Prabhu Deva and Boney Kapoor were present at the venue as special guests.

The first look says a lot about the picture with all the main star casts having baby nipples in their mouth. The poster and the music very much is sure to prompt the audience to book their tickets for the movie in advance, so that they can enjoy it thoroughly. The movie is said to revolve around news of newborn baby, but was not inspired by the Hindi movie Beti No. 1.