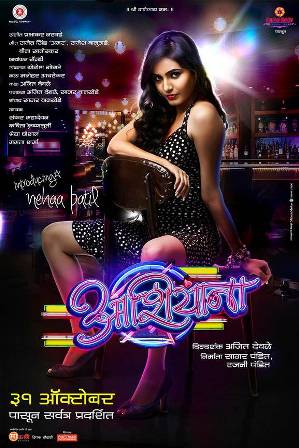 Aashiyana is a Marathi movie that is to be released this 31st October, 2014. The producer of the movie is Rajani Pandit and Sagar Pandit. Ajit Devle is its director and the studio for shooting is Om-Sai Riddhi Production. The movie stars actors like Krutika Gaikwad, Nehaa Patil, Sai Kalyankar, Prafulla Samant, Yateen Karekar, Aaryan Kapoor, Sanjivani Jadhav and Raaj Patil. The story has been conceptualized by Ajit Devle and music scored by Prabhakar Narwade. The Lyricist is Vina Satoskar, while screenplay is done by Sagar Wankhede. The music label is of Zee Music Company. The singers who have lent their voice for the movie are Kavita Krushnamurti, Shankar Mahadevan, Mamata Sharma, Shreya Ghoshal and PRO Deepak Chaudhari. The movie is of drama genre.

The movie witnesses the debut of three Marathi actresses in the form of Krutika Gaikwad, Neha Patil and Sai Kalyankar. They are to be seen together in this movie. Among the three, Sail Kalyankar is said to have worked in three different Marathi serials, which includes ‘Swapnanchya Palikadle’.

Moreover, Ajit Devle, the script writer of the movie makes his debut as director in Marathi movies by this film. Recently, he had worked for Samruddhi Porey as assistant director on the much discussed upon Marathi move, Dr. Prakash Baba Amte. Through his movie, his is slated to receive recognition as independent director.

The movie revolves around issues that are faced by 3 young girls, who come from the difference segments of the society. The movie relates as to how these girls overcome all types of hurdles bravely, to succeed in life. Natural locations were selected to be shot and every member of this unit is awaiting eagerly for the release of the movie. It is undoubtedly a much awaited movie that is expected to cause a sensation and draw Marathi viewers in huge numbers.