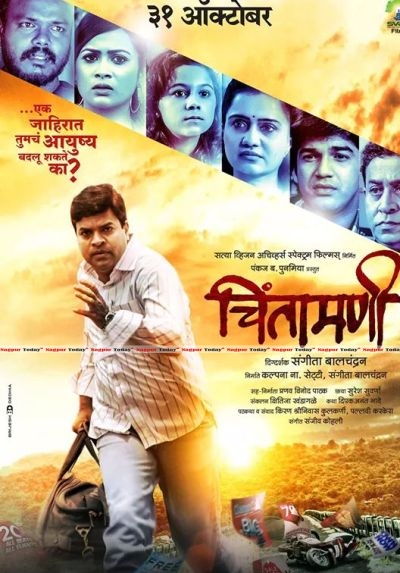 Love, family drama and suspense .You will find it all in the Bharat Jadhav and Amruta Subhash starrer film Chintamani that released this Friday. Starting off on the note of a family drama, the film turns into a thriller quite unexpectedly. Based on the lines of thrillers like Aamir and Kahani, Chintamani is predictable but surely entertaining. There is place for relationships and family in the story as also for fight for justice.

Bharat Jadav, Chintamani was working in a marriage bureau when he meets Amruta Subhash and soon the two get married. Their happy family consists of the couple and their daughter Kimaya. Bothered by the nagging of friends and family around him for being a loser in life for having made no money he is prompted to seek opportunities to make quick money. Like many ambitious people who fall into traps for money, Chintamani too follows a newspaper add that promises him a wholesome of 1 corer rupees as returns. Bharat falls for the allure and there he goes behind the advertisement. What follows is a dangerous trap for Chintamani and his wife.

Chintamani’s daughter Kimaya is kidnapped and the father tries all possible ways to release his daughter. But this not a simple kidnapping but a more complicated trap that needs to be handled cleverly. Will Chintamani turn into a hero from zero when it is most required of him? How life takes the most unexpected turn for this ordinary man is the film’s story.

Bharat Jadhav impresses beyond words. The actor carries the film on his shoulders and delivers a fine performance. Amruta playing Chintamani’s wife also matches her male counterpart shoulder to shoulder and is exceptional in some scenes. The two make a very watchable couple. While the same cannot be said about the child actor who plays their daughter, Tejashree Walawalkar. Other supporting actors like Ruchita Jadhav, Uday Tikekar, Hemangee Rao, Milind Shinde, Kamalesh Sawant, Jayraj Nair give mediocre performances.

Director Sangeeta Balchandran doesn’t disappoint but the only big loop hole in the film remains its script that lacks novelty and originality. It seems that a rather nice story that could have been driven to an end in a much better way is left to go astray because of unoriginal script that takes inspirations from few Hollywood films.

The movie is a good choice for this weekend. It is not an exceptional drama or thriller but it surely entertains. The most watchable thing is the lead couple’s performance that makes an impact.