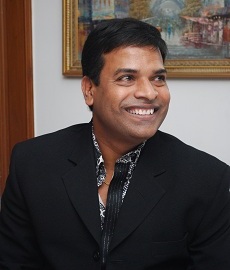 It was a dream come true for Bharat Jadhav when he made his entry in Marathi cinema a decad back. The actor who belongs to a lower middle class family from a village in Maharashtra films were like a dream. But it is through his sheer talent that he bagged potential roles one after the other and established himself in Marathi cinema. The actor is today known for his films like Jatra and Saade Maade Teen and is one of the bankable stars of the Marathi industry. He not made a mark for himself in commercials cinema but is also a popular theater actor who still loves to perform on stage no matter how much glamour the big screen offers.

Wiki : It was his passion for dancing that introduced him to the world of cinema. He has a famous item dance song to his credit form the film Jatra. The song Kombdi Padali , which is hit song in Marathi , features Bharat Jadhav along with the actress Kranti Redkar. The song was a huge hit and is one of the most liked songs of recent years in Marathi. The song was later adapted in the Hindi film Agnipath with Katrina Kaif dancing to its tune. Bharath’s much energetic dance performance was liked by one and all.

Staring his career from thearte, Bharat is still active on Marathi stage. He was an important part of the very long running play Time Pass and also of Sahi Re Sahi. Known for a natural gift in comedy and serious drama, Bharat has likened himself to the audiences with his films like Mumabichya Dabbewala, Galgle Nighale, Shikshnayachay Aichya Gho, Kshnabhar Vishranti and Ringa Ringa . No Entry Pude Dhoka Ahae was one of the many memorable comic performances given by the actor. His gifted talent to pull off the most difficult and subtle comic sequences is his biggest strength. In the many multi starrer movies that he has been a part of, Bharat has shined for his superb diction and a natural sense of delivery comic acts. In the year 2014, his film Pune Via Bihar released in January to a lukewarm response. The film failed to attract the audience and the critics but bharath ‘s performance was noted to be excellent once again.