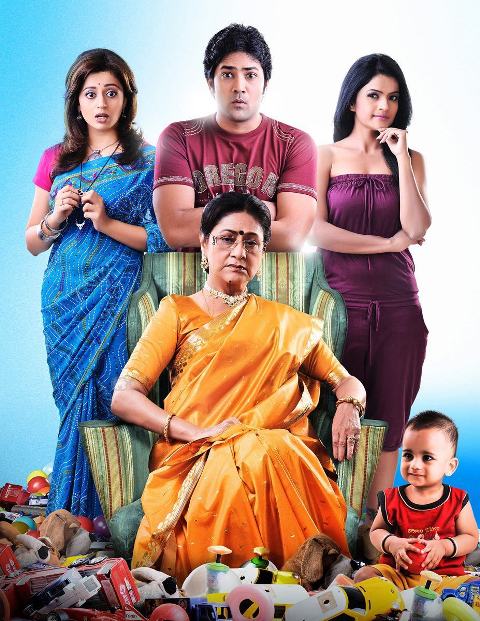 A haughty and stern mother- in- law might sound outdated. But evidently family dramas never go out of vogue. Be it the Saas Bahu khit pit or the husband and wife’s banters. Bol Baby Bol is about a highly principled and austere Durgadevi played by Aruna Irani who is adamant like the mountain. But all this is only for the good of her son played by Aniket Vishwasrao. . Anikit’s love interest is soon to be his wife. But is this marriage really made in heaven? Well, Durgadevi , for the staunch believer she is in Astrology , knows that is made in heaven only if the horoscope of the girl matches thoroughly with that of her son.

So does Anikit leave it to the stars to decide about his love? Well, he is left swinging between the mother and the girl in this chakkar of the stars. Then perhaps it is the stars themselves that show him a way through the dilemma. He strikes upon an idea that might just allow him to have the best of both worlds. But for how long ?

Makarand Anaspure plays the crafty Astrologer who is also Durgadevi’s brother and Anikit’s mamaji. She follows him religiously and minds all her Shani, Rahu and Mangal. Like in all dramas, there is change of minds in this story too. There is compromise and forgiveness too. But all this does not happen before there is an upsurge of emotions and welling up of feelings.

Aruna Irani is a class apart. Returning to Marathi after a long hiatus, she presents a delectable sight on screen. She is soft yet stern, understanding yet adamant. All an all an apt role for her in which she comes through endearingly. Her experience and maturity comes to life in a positive way.

Makarand Anaspure on the other hand matches with the veteran actress in his wit ad comic timing. He does it best what he is so well known for – making people laugh. Anaspure definitely steals the show with his effortless acting. Anikit Vishwasrao is commendable. He is likeable in both happiness and trouble.. Their roles have potential but one might wonder if the writer had not developed them completely. Other actors namely Neha Pendse and Siyaa Patil,also support them well.

Bol Baby Bol creates high expectations in the first half but the secondly grossly disappoints. The story in the end leaves you unsatisfied. There is lots of scope for improvement in the script . The direction by Vinay Lad too gives an impression of lacking control. Music could have been definitely better.

Bol Baby Bol entertains no doubt. So if you simply want go there and have some light time grinning, Go Ahead.

Vijay Tendulkar’s Kamla to be recreated on TV