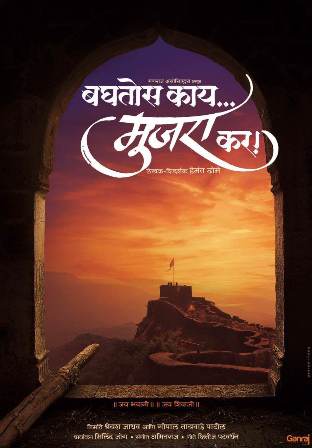 Hemant Dhone is making his directorial debut with the film Bhagtos Kay Mujra Kar. The trailer of the film has been released and it indeed looks interesting. Taking an unusual topic for his story Hemant Dhone is also playing one of the three male lead in the film. The film is a tribute to Chhatrapathi Shivaji Maharaj. Hemant has also written the script of the film.

Bhagtos Kay Mujra Kar deals with the subject of the present restoring beauty and prestige of the historical monuments of Maharashtra. The present generation and also the government is negligent towards the preservation of cultural heritage of our state. The film calls attention to such issues that has been thrown the spotlight on.

Hemant Dhone stated that he has picked up this subject that is close to his heart and indeed calls for immediate attention. More than the authorities it is the common man in Maharashtra who needs to open his eyes to such relevant issues.

Hemant is also acting in the film. The cast includes Jitendra Joshi, Ankit Vishwasrao and Hemant Dhone. Hemant had earlier contributed as a script writer for the film Poster Girls. Now he is stepping into direction.

The producers of the film are Gopal Taiwade Patil and Vaishnavi Jadhav. Music is given by Amit Raj.

Previous Jawans are Important, not Artists: Nana Patekar takes a Jibe at Salman
Next A Marathi movie on Mario Puzo’s crime novel ‘The Godfather‘ to be made soon