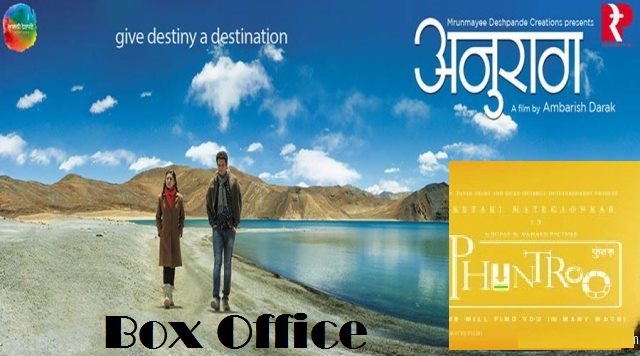 It was rather a busy Friday for M Town with two big films released including Anuraag and Phuntroo. Both the films managed to get a decent review, which carry enough potential to attract the Marathi audience all across the state of Maharashtra. Now, let’s talk about Anurag, the film is all about relationship and giving their bond a second chance that makes them choose a cool and picturesque atmosphere of Leh- Laddakh the paradise of India.

The film though was appreciated with for its cool locations but fail to manage to enough of audience as compared to the other film released the same day in M Town. As per reports, the first weekend collection was around 3.5 crores, which is actually a good figure for Marathi movies that has limited audience. Now, talking about the other film called Phuntroo, the film managed to get a good reviews from the critics. The science fiction and love story really managed to pull the crowds all across the state giving good moolah.

As per reports, the first weekend box office collection for Phuntroo tolled to around 4.5 crores, which is really a good amount to get. The film also managed to get a good start getting 1.53 crores on its first day, while on the other release Anurag managed to get 1.29 crores. Let’s see how the two would perform during the weekdays and collect at the end of the first week.