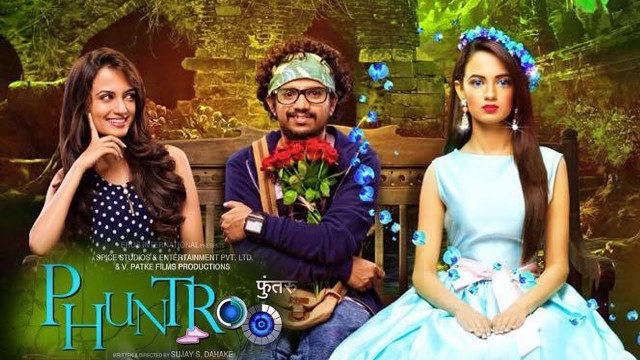 This Friday, we had two Marathi films releasing, which include Phuntroo. The film is directed by Sujay S Dahake and produced by Krishika Lulla under the banner of Eros International, Spice Studios & Entertainment Pvt. The film has Ketaki Mategaonkar, Madan Deodhar, Shivraj Waikar, Shivani Rangole, Ruturaj Shinde, Anshuman Joshi and Rohit Nikam in the lead roles.  The film has the story from Sujay S Dahake, while the music is given by Hrishikesh Saurabh Jasraj. The film falls in the genre of Science Fiction, comedy and romantic. Time to dig in deep into the film to get the crux of the same as under:

Meet Vira the college geek played by Madan Deodhar who is overwhelmingly drawn to the slim beauty Anaya. She is a college union general secretary and is relationship with one of her college senior called Nano who has been consistently winning the gadget competition in the engineering college. In the next project, Nano needs a lab and computers of higher specifications, he also convinces Vira to help him along with Anaya of course. The lab allotted to them is the deceased founder of the college wherein they start their work. Amidst their work, Vira expresses his feeling to the girl, but she hardly cares about the same. Dejected by the rejection, he is distracted and founds the project of the deceased project which deals with holographic project of an artificial person programmed by him. Vira then continues his wok and adds the programmed person unlike created via artificial intelligence more it stars becoming like a real Anaya.  What happens the next is interesting to explore.

It is really ironic to see how Vira an undergraduate is able to develop a holograph as per his own whims and fancies for which the deceased founder took ages to create. With this and other factual errors in the film, it soon become indigestible. However, looking at the other side, Phuntroo can be called as a rare movie, which is well crafted in a technical point of view. At this juncture when commercial films are made to make money and hence finding similar films either bases on some TV serials or plays, this film can add some amount of fresh air for the audience. The look and feel of the film seems to give you a mystical feel. Thanks to the talented director of photography. The visual effects found in the film giving holographic project are simply spectacular. VFX even in some big budgeted Hindi films at times can be cause of laughing stock in many ways. Yet in Phuntroo it was managed the best.

The dialogues in the films deserves a special mention as they are known to be full of sharper wit and smart references to scientists and other thinkers including Sigmund Freud. The conversation between Phuntroo and Vira are among the high points of the movie. The other positive sides of the film are acting, Ketaki Mategoankar and have come out of age with her acting here with her portrayal of the film. The artificially created person is brilliantly done by Ketaki with ultimate dialogue delivery as well.  on the other side, Madan Deodhar too was seen giving her superlative performance while playing the character of Vihir and seen doing justice to egotist science geek who has hopelessly fallen love with a girl.

Even the solid performances, sharp dialogues and the technical expertise are not enough to save the time from becoming something, which doesn’t draw enough into its world in order to make it enjoyable. The film can only be applauded for being that rare and well mounted movie in Marathi cinema, which broaches spaces hitherto unexplored.