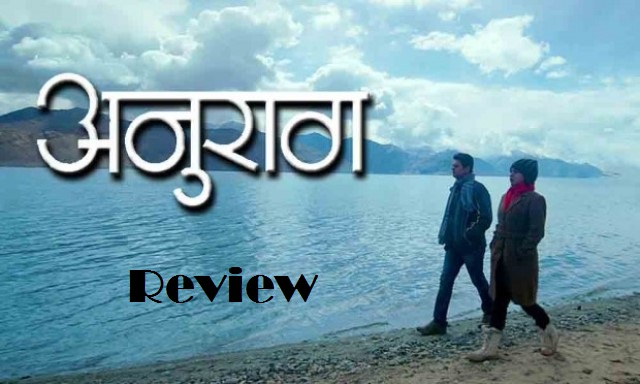 This week we have two films releasing in M Town, which certainly include the most awaited film Anuraag. The film is all about relationship and love starring Mrunmayee Deshpande and Dharmendra Gohil. The film is directed and produced by the talented filmmaker – Dr. Ambarish Darak under the banner of Mrunmayee Deshpande Creations. The film is shot close to Mother Nature amidst the soothing environment of Leh Laddakh. The music is carried out by Sameer Mhatre and cinematography is done by Suresh Deshmane and the script is written by a slew of people. Now, time to dig in deep into this Marathi film and get the crux of the same.

The film though is inspired by the romantic drama film called Before Midnight by Richard Linklater, yet it seems different from it in many ways. However, the review of the film would incomplete without mentioning about this trilogy. The film from Linklater dealt with relationship staus of Jesse and Celina on three different junctures sprawling in the period of nine long years. The film proved one of the best work based on relationship portraying without much simplifying the same. Anuraag may not be a direct remake; however, it has elements seen in the Satish Rajwade film Mumbai Pune Mumbai and something from the film Before Midnight. It is certainly an earlier films with no story in it, the film is more about the characters in it and they will go through. Unlike Before Midnight, it showcases the reexamination of love wherein the relationship is a standstill and has lost excitement in their life.

You can find loads of discussion between the two lead characters and that too at one of the most gorgeous locations wherein they have gone in order to give destiny the best destination (as the title yells). Before Midnight uses Greece in the background, Anuraag is seen in Leh, which makes both the location aesthetically similar and hence is the treatment. Camera is often seen invisible without getting the heed to it and allows the characters react with each other.

Risbah played by Gohil is a successful entrepreneur and is married a lady called Saumya played by Deshpande after his first wife’s death and has a daughter from his first marriage. Saumya who was his business secretary seen easily entering into the role of his wife, however, she faces problems when she is pregnant as their relationship goes downward. And this is where they decide to visit Leh and discuss the road ahead an attempt to secure their marriage with different available options.

Right from the location, the subject and the content of the film, one can have words of applauds, however, at one department which is really important the film lags behind. It is nothing but the dialogues of the film. You can find very much tough handed narrations just to inform the audience about their current plight. More important was the efforts to add general conversation and let people understand from their mutual communication and making the characters unpleasant and distant.

If you think that this film is simple to make, better take a second thought. You need loads of preparation to make a film, which talks about relationship and the road ahead purely based on conversations amidst the soothing and aesthetically rich locations. Also, it needs patience to watch this film, which makes it a niche film attracting only a certain section of the audience who has interest in such themes. Technically the film is good and so is the performance and direction with a bit of flaw, yet it is not a mass film that can give you enough typical masala one can expect from films.