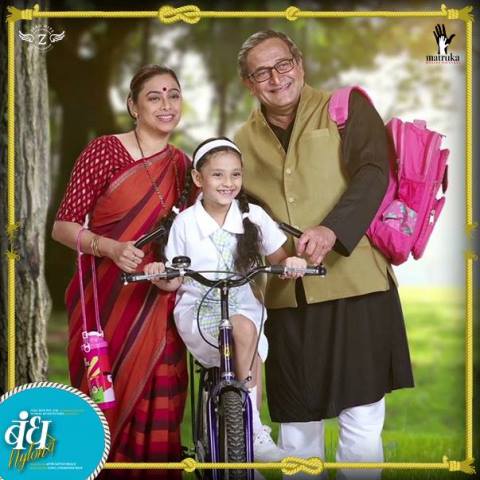 This Friday for the Marathi cinema, we had one movie called Bandh Nylon Che, which released amidst good buzz among the Marathi audience. The film is directed by Jatin Wagle and produced by Suji Nair and Sunil Nair under the banner of Maharashtra Times and Zero Hits. The film has the Subodh Bhave, Mahesh Manjrekar, Medha manjrekar and Shruti Marathe in the lead roles, while Sanjay Narvekar, Sunil Barve and Pranjal Parab were in supporting roles. The film is a social drama with a subtle message for the audience. Now, how about digging deep into the film to get the crux of the same as under:

Meet Devdutta Jglekar played by Subodh Bhave who is a Mr. Project Head returns to Bombay from United States after a decade or so with his wife Anita played by Shruti Marathe and daughter Sara played by Pranjal Parab. He is a career oriented man and ensures he cracks all the deal when he is seen with any potential client. He maintains a estrange kind of bonds with his parents – Raghunath and Mangal Joglekar played by Mahesh Manjrekar and Medha Manjrekar respectively since they do not sell their land for his higher studies based in Konkan area called Dapoli. However, when he is back to Mumbai, he asks his parents to come along to support his granddaughter Sara but they refuse. He is then helped by his scientist friend called Ravi who gives him humanoid robots in the replacement of the grandparents. What happens next is interesting to explore and things they want to do in their life.

Of late, the Marathi movies have gained edge by embarking with quality content and Bandh Nylon Che is no exception, which portrays a different story giving a subtle message to the audience. The film is based on the award winning play with the same title. The director was smart enough to showcase the entire movie with greater calm and professionalism giving nothing but the best to the audience without actually allowing them to have a loo break. In other words, it’s a gripping film, which unveils one of the best messages one can expect from the film like this.

Both the Manjrekars (Mr. and Mrs in the real world coming for this film) did exceptionally well while playing the characters of the grandparents. Both in the role of a real and robotic grandparents, they were exceptional overshadowing the others in the film. Subodh Bhave while playing the character of an arrogant and success hungry corporate guy too had a good performance over the silver screen, which is a different role played by him in any movie yet he managed to do things better. Also, the actors like Shruti Marathe, Pranajal Paran and Sunil Barve too were seen doing their job better. Indeed, the acting of the child actor was natural and applauds to her efforts in this film.

The film has a decent story that has been brought out with decent direction as well. The screenplay though was tight in both the halves yet there were some amount of flaws in the second half as well. The direction was new in his job yet he did a commendable task in mastering his film and was able to showcase one of the best stuff to the audience. Editing and cinematography went decent, which helped to get an edge over the technical thing. Music too was decent and the songs composed by the Amritraj went viral among the Marathi audience giving loads of applauds for them as well.

The film Bandh Nylon Che is a content based film, which showcases the current world living in a rat race of highly competitive market amidst tech savvy generation. The film is emotional though but has raised a valid issue in the movie, which seems to have pitted the world very badly. Thanks to the applauding action performance of the lead actors in the film, the movie Bandh Nylon Che is able to get recognition since it went on floor, which makes the film get a better rating.