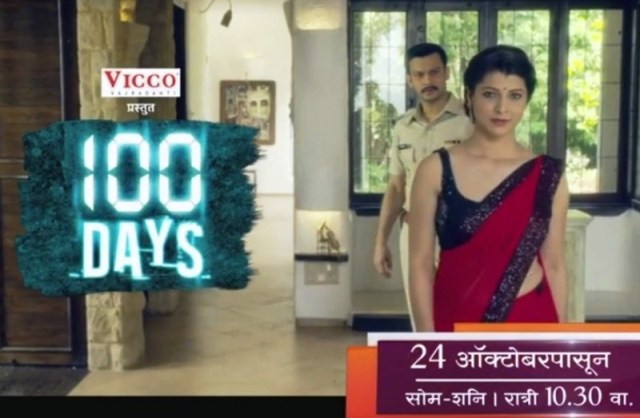 As the popular horror thriller Ratris Khel Chale went off air, the romantic crime thriller 100 Days telecasted its first episode. It showed Tejaswini Pandit playing the role of Rani who is put up with an aging husband played by Ramesh Bhatkar. Tejaswini’s character Rani wore beautiful sarees with impeccable styling. Although there was a charm about Rani while she took care of her husband Dhananjay Sardesai, there was something mysterious about her that served to create the excitement which was essential for the first episode.

100 Days will be telecasted in the slot of 10.30 pm from Monday to Friday. Ramesh Bhatkar is an accomplished Marathi actor who has played memorable roles in Marathi serials and movies. As he was not shown in the trailers, he came as a surprise package in the first episode itself. Adhinath Kothare will be playing the male lead of the story. He will be investigating the missing of Dhananjay Sardesai. As of now it seems inspector Ajay Thakur (Adhinath Kothare) will be appearing bit later as the story progresses.

100 Days will be an interesting tale distinct from the usual soap operas that the Marathi  audience is used to watching on the TV. Zee Marathi is all set to witness high TRPs this year.