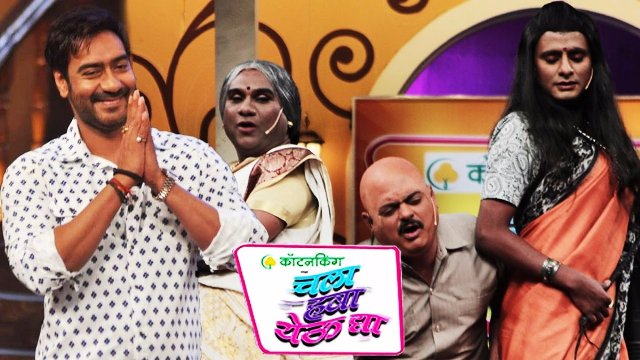 Even Hindi actors are now coming to Marathi platform for promotion of their films. Ajay Devgan and Kajol appeared in Chala Hawa Yeu Dya and the episode was hilarious. Ajay And Kajol, the lovely couple were laughing out loud throughout the show. Kajol conversed in Marathi.

The team of Chala Hawa Yeu Dya presented a spoof of Ajay Devgan’s super hit film Singham and there was also imitation of Kajol’s character Anjali in Kuch Kuch Hota Hain. Bharat Ganeshpure played the role of Amrish Puri from Dilwale Dulhaniya Le jayenge. There was a short spoof of the scene from Dilwale Dulhaniya Le Jayenge in which the father says the line, “ Ja Simran Ja … Jeele Apni Zindagi.”

Ajay Devgan’s Shivaay will be releasing this week. It is a supernatural thriller and it boasts of a theme that will be seen for the first time in Hindi films. The trailers are surely exciting.