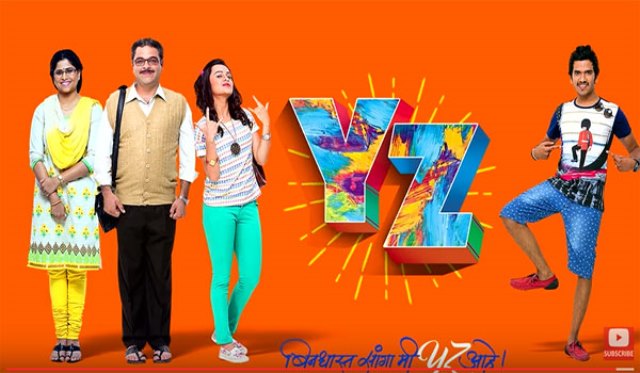 This Friday, the M Town has one movie to release, after all it comes this week considering the Independence Day at the backdrop. This include the strangely titled Marathi movie called YZ. The film is directed by Sameer Vidwans, while it is produced by Sanjay Chhabria and Anish Joag under the banner of Everest Entertainment in association with Pratisaad Productions. The film has an interesting star cast, which include Sagar Deshmukh, Akshay Tanksale, Parna Pethe, Sai Tamhankar and Mukta Barve in the lead roles. The music comes from Rishikesh, Saurabh & Jasraj, while the runtime of the film tolls to around two hours ten minutes (130 minutes).

One of the good things about the film YZ is that it is consistently peculiar though it may not be par and very much original yet can be called as a smart stuff. The film has believable characters and it is seen avoiding the usual traps of traditional style of storytelling.  This film is all about a 33 year old history lecturer from a place called Wai. He is on assignment at Pune who happens to be an introvert as well and is simply not keen to go any new experience in his life. He keeps his marriage delayed and often is seen indulging into day dreaming to get away from the reality. Being on the assignment, he finds things terrible and thus relocates to another place keeping him confined in his own shell. However, when meets his student Battees things start to change and he accepts the same till he gets a marriage proposal from a girl called Pamrekha played by Tamhankar who is a religious homely girl. He feels trapped but takes his steps ahead in his changing life.

One can find three central plot ideas in the film, which happen to be very much familiar making things predictable for the audience. You have a blend of three movies coming in YZ from films like Shagird, About A Boy and The Secret Life of Walter Mitty. The film starts with infusing the two movies together but fails to include the third making things too much cosmetic. Though one can find some amount of humor with this amalgamation yet it has ended up making the screenplay compact. The first half of the movie is loosely plotted and keeps the audience in the dark regarding film’s focus. The reasons are simple; the time spent on counseling Gajanan by Battees is really long. Though you may appreciate the crisp dialogues and performances but these key narrative, which are the must in this department despite being to overboard. The length of this segment could have compensated the best had this been stretched in the second half but things are different there.

The characters found in the film are very much interesting due to the fact that the world they are found is very much modern. There is a huge frame of references in terms of literary options, the movies, electronic gadgets, social behavior and other things that make things better. The humor in the film is high end and mostly called as the tongue in cheek kind of stuff giving too many LOL moments. Now talking about the dialogues and cast of the film these are two vital elements of the film. Sagar Deshmukh is a talented actor from theatres and has showcased the best while working in the role of a Gajanan character. Similar is the story of Battees who played a perfect role in the movie, in fact the female cast is stronger than the males ones.