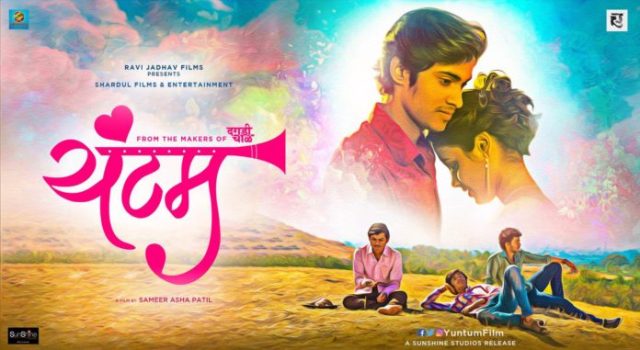 Synopsis: The M Town has no more have the scarcity to good movies and one such film to hit the theatres include Yuntum. The film has interesting star cast, which goes like this Vaibhav Kadam as Ranga, Apoorva Shelgoankar as Meera, Aishwarya Patil as Kavita, Sayaji Shinde as Raaosaheb, Akshay Thoorat as Ramya and Rushikesh Zagade as Jedya. The film is directed by Sameer Asha Patil, while it is produced by Vinod Malgewar and Vishal Chordia under their banners Shardul Films & Entertainment in association with Ravi Jadhav Films. The star cast of the film has the story by Sameer Asha Patil & Mehul Agaja, while the music is given by Chinar & Mahesh whereas the the lyrics have been jotted down by Mangesh Kangane.

The sound design of the film is carried out by Kunal Lolsure, while the background music is given by Mangesh Dhadke and the Cinematography or DOP is carried out by Aakash Raj. The editor of the film is Abhijeet Deshpande whereas the art director is carried out by Sidharth Tatooskar, while the costume is designed by Minal Desai. The Visual Promotion is carried out by Just Right Studios. Now talking about the plot of the film, Yuntum  is all about the story of love and an illusion of love along with the rise and fall of this instrument wherein we have seen a boy who seems to be in the dilemma with a special gift and the girl is bounded by fate and the man is caught in the past along with the divine intervention of God. Stay tune to know about this film and others.