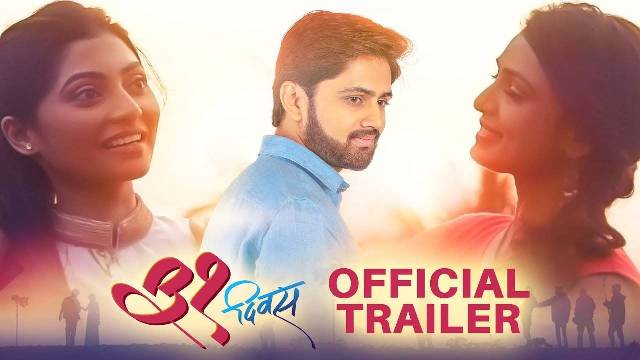 The Marathi film 31 Divas happens to be the most anticipated film for the unique theme and content. As we see the M Town embarking upon a number of films with different genre and good content this film is certainly not an exception for sure. Though the audiences are not so demanding when it comes to the M Town film yet they have a variety to catch especially when you compare with the other regional cinemas or even the mainstream films as well from Tinsel Town. Well, the makers of M Town film brought Shashank Ketkar and Mayuri Deshmukh together for the said movie
The content and the story of the film happens to be made up of unique subject with the right combination of entertainment. As you check the trailer, it introduces first the film and then the theme along with the characters as the aspiring filmmaker too have played by Shashank Ketkar who is now looking for an opportunity. But he is seen faces a huge personal hurdle in his journey. Yet he manages to overcomes it and then finally embarks with this film and is able to come out with an extremely unique way.
Having said, he was able to embark upon a different content and we see it vividly in the released trailer. Interestingly the film’s shooting was completed in just 30 days that speaks a lot about the film and its content along with the wish and will power of the actor. The idea seems very much interesting and thus making the M Town audience very much excited about the same. Though we are not very much sure about the real acts and efforts of making the film in one day in India, as we have seen several efforts in Hollywood and they were successful as well. Now, time to catch the trailer of the M Town film 31 Divas, have a look and yes do not forget to embark upon with the required comment about the same.