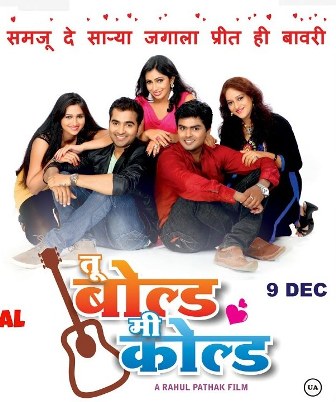 Synopsis: The M Town is not short of good films and it has the TV show called Tu Bold Mee Cold. The film falls under Comedy, romance and drama and it is directed by Rahul Path, while produced by Rahul Pathak under the banner of Shourya Films International AK. The film has Anup Belwalker, Sidharth Shah and Seva More in the lead roles.  The director has jotted down by the director, while it is releasing on 9th December 2016. The film is of 130 minutes duration while it has the certification of U. The lyrics of the film has been jotted down by Raviraj Powar while the music is composed by Aishwarya Malgave,

The film happens to be a romantic comedy, which is all set to hit the theatres soon. The makers of the film have released the posters and promos in the media, which seems to have got a decent response from the media and the M Town audiences. The film has entered into the promotion mode wherein the makers of the film are busy in promoting the same. Well, if you are yet to check the promos or the posters, better have a look at the same and would certainly help you get the crux of the same. Stay tuned to know more about this Marathi movie and others.