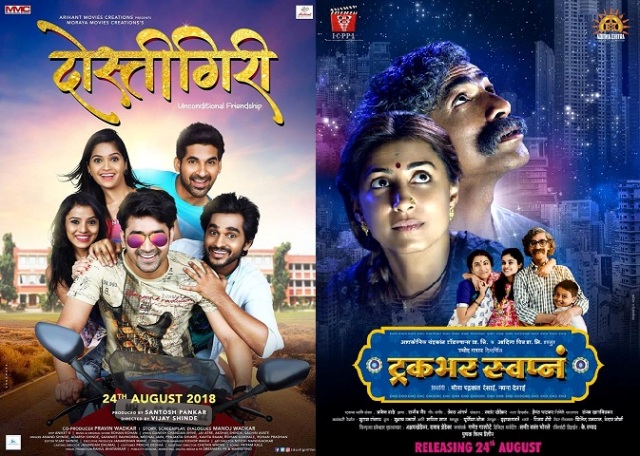 The last weekend, we had two movies releasing in M Town, which included Truckbhar Swapna and Dostigiri. Both the film had average ratings and minimal buzz in the media. With lots of other choices available for the audience, the films released in M Town had to suffer a lot. Let’s check the way these films have performed starting individually starting with Truckbhar. This film had little buzz in the media and the low rating proved bad to worse in many ways. Though the film had decent performances of the actors like Makarand Deshpande, Sahil Gilbile, Smita Tambe and Kranti Redkar, but the poor content made things bad to worse.

The film had merely 70 crore on the first day, while the other two days the collection went to around 80 lakhs and 1 crore respectively. Thus the 1st weekend box office collection for the Truckbhar reached to around 2.5 crore, which is not that great figure to celebrate. The week days would have similar collection with the week’s collection reaching wouldn’t be that pleasing for sure. There is not much hope for the film to perform over the box office and it will continue to score the same way. Let’s check the other film now. Well, Dostigiri also went on similar note but in terms of ratings and review, it score a bit high marks.

The film had great things to enjoy when it comes to scoring high over the box office. The first day of the film went on to gain around 72 lakhs, while the other day had witnessed a collection of around 90 lakhs and the third day, which happened to be Sunday had a higher collection to witness, which went on to gain around 1.15 crore. So, the first weekend collection for Dostigiri went on to score about 2.77 crore, which is slightly higher than the other. The reason could be the theme of the film that was based on youth and issues related to them. The experts are expecting to see similar collections to the coming week, which will add more collection in the first week when compared to the other.