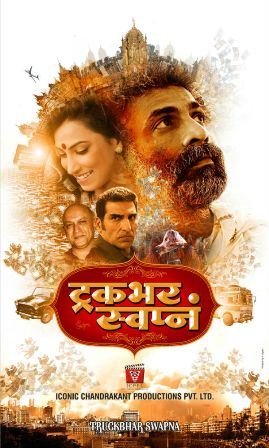 Nitin Desai is often has tried to give anything new to the audience. With his upcoming movie ‘Truckbhar Swapna’, he is all ready to surprise to the audience with his skill, talent of grandeur, authenticity, excellence and innovation.“Truckbhar Swapna” is a movie about a common man from Mumbai city. Recently the film came on floor carried out at ND Studios Karjat by Kanchan Adhikari. The movie is directed by Pramod Pawar and will have Makrand Deshpande and Kranti Redkar in the pivotal roles.

The movie also has stars like Aditi Pohankar, Mukesh Rishi, Yatin Karyekar, Suresh Bhagwat and Smita Tambe. The movie is written by Prashant Khedekar and Director of photography is Rajeev Jain of the movie that has begun the shooting. The man called Nitin Desai has been known for his excellence in the field of direction and production via films including Hello Jaihind, Balgandharva and Ajintha. He is popularly known the detailed work and it keeps an eye on contemporary and period structures.