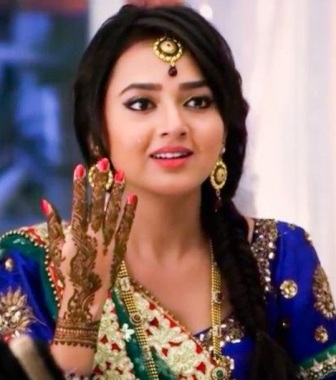 Tejaswi Prakash Wayangankar is an Indian television actress who played one of the main leads in the show Swaragini as Ragini Lakshya Maheshwari on Colors TV. In 2017, she played a leading role in the series ‘Pehredar Piya Ki as Diya. Wayangankar was born and brought up in a musical family—her father, Prakash Wayangankar is a singer by profession. She has graduated in Electronics and Telecommunications Engineering from Mumbai University in 2015. Wayangankar has always had a passion for music, singing and acting and she started working on Indian TV with her first show in 2012.

Tejasswi will soon be seen in much-awaited royal drama, ‘Pehredar Piya Ki’. The promo of the show has hit the tv screens and it looks promising. Tejasswi looks absolutely gorgeous as the young and innocent looking bride. Swaragini was a Television family drama on Colors channel. The show was produced by Rashmi Sharma from Rashmi Sharma Telefilms. It starred Helly Shah, Tejaswi Prakash Wayangankar, Varun Kapoor and Namish Taneja in lead roles. Tejaswi has played the role of Ragini in the series.

Some of the TV shows include Rashmi Raju Bhargava, Sanskaar – Dharohar Apnon Ki, Swaragini – Jodein Rishton Ke Sur, Comedy Nights Live, Comedy Nights Bachao and Pehredaar Piya Ki. Talking about the awards, she has won a number of them which include the Colors Golden Petal Awards       for the Most Lokpriya Naya Sadasya and Most Lokpriya Jodi, the Indian Telly Awards for the          Best Actress in a Negative Role, Colors Golden Petals Awards for the best actress for the show called Swaragini – Jodein Rishton Ke Sur.