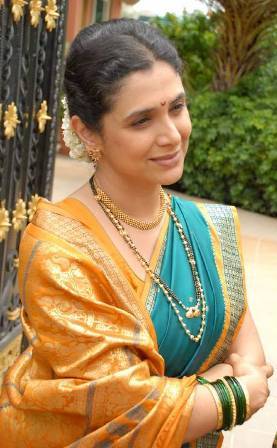 About two decades ago she was the most popular daughter- in -law of the small screen. Tu Tu Main Main , a comedy serial based on the sour and sweet relationship between a daughter- in- law and mother- in- law , was highly popular among the audience. In the serial produced and directed by her husband Sachin Pilgaonkar, Supriya played the role of the daughter- in- law whereas another acclaimed actress of the time Reema Lagoo played the role of the mother- in- law. The serial was a rib tickling comedy which recorded a very high viewership in the days when television was gaining increasing popularity among the common masses. Tu Tu Main Main is the magnum opus for Supriya Pilagaokar who has acted in a number of Marathi films and serials. She is also well known for her few good roles in Hindi films too.

Supriya was always charmed by performing on the stage thanks to the encouragement by her parents. Right after the completion of her education, she took to theatre and played lead roles in many memorable plays in Marathi. The actress had a striking stage presence because of her active personality and a natural spontaneity in her acting. It did not take long for movie offers to come her way. After acting in few Marathi films as lead actress, she met her future husband Sachin Pilgaokar who was a noted producer and actor in those days. She was paired with him in films initially. This later transformed into an inseparable bond between the two eventually leading to their marriage. When Supriya acted in Tu Tu Main Main she was Sachin’s , who was the producer and director of the serial, wife. Later there was a revsion of the serial , Kadwi Khatti Meethi ,named in which she played the mother –in-law in.

Though she is well known in Hindi industry too, Supriya unlike her counterpart Reem Lagoo has not got many opportunities in Hindi films. The actress has no memorable role in Hindi. Her Bollywood career includes few roles like that of Amitabh Bachchn’s wife in Aitbar. However she has been active on the small screen.