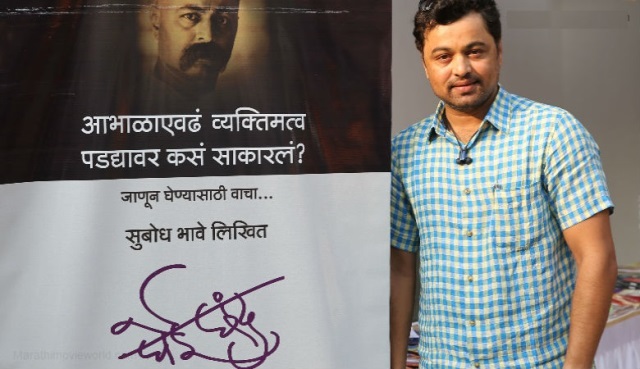 After proving his worth in the field of acting and filmmaking or direction, the known Marathi theatre and TV actor called Subodh Bhave is now seen in a new role of a writer. He has embarked with a new book called ‘Ghei Chhand’, which will be soon published officially in Mumbai. In fact, it will be launched on 9th November and on 12th November 2016 in Pune. During the Diwali morning special program and the chit chat seen with him has further released about the details about the book by the man Subodh Bhave.

In this book, he has described regarding his journey for being an actor right from his role and performances as a stage or theatres like ‘Katyar Kaljaat Ghusali‘ for directing the cinematic version of the same play. The writer feels that this phase of this life has played a vital role in this and has therefore gained a lot in this sector with loads of experience. Hence he was seen feeling the best about the properly documented.

The book has been published under the publication group by Rasik Sahitya and Grafat who all have come together to embark with the same and can cost you around 400 INR.  In case if you are keen to read this book you have the option of booking the same on 12th November 2016, as the autheor has given a special offer of Rs. 300/- only. In fact people booking in advance will get the DVD as well of the actor free of cost along with this copy.