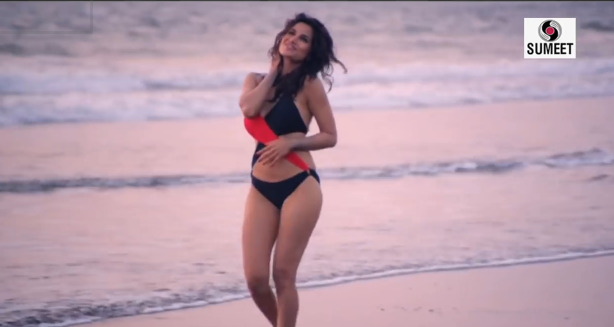 Smita Gondkar’s music video “ Pappi De Parula “ is released on the web and on TV. It has got many likes on the web and on the Tv too it is getting popular now a days. The lean sexy actress looks extremely beautiful in the video as she wears an attractive bikini. Smita wears a bikini for a video first time and her attitude looks pretty hot. She carries herself with grace and panache on the beach. Talking about her bold avatar, the actress said “ I wanted to make sure that the shots are done neatly so that nothing would look vulgar. “ Smita was conscious of the fact that there is a thin line between sensuality and vulgarity and so she took extra care from her side. She said, “ I coordinated with the director Jitendra after every shot to ensure everything on screen looks exactly the way it was desired to be.” Truly an attire is all about how you carry it.

Smita’s movie Just Gammat is ready for release and the actress is gearing up for its big show. The song “ Pappi De Parula” has her donning a red black bikini on the beach in Konkan and soaking the Sun. Just Gammat is directed by Milind Kavade.