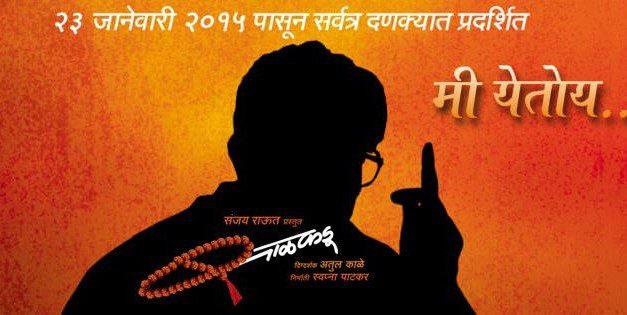 If rumours are to be believed , the upcoming Marathi movie , “Balkadu”, is a biopic on the Shiv Seva leader Bal Thackeray. The film is all set to hit the theatres on 15 January. It is directed by Atul Kale.

The film’s posters are already launched but there is lack of clarity about the theme and subject of the film. The film is produced by one of the leading men of Shiv Sena. Bal Thackeray was a revered personality in Mumbai till his death in 2012. Even after his death, he is remembered for being an example of hero worship with innumerable Mumbaikars worshiping him for his contribution to the city of Mumbai.

In Hindi, Ram Gopal Verma directed Sarkar was based on the life of Bal in which Amitabh Bachchan and Abhishekh Bachchan played the lead roles. Later it was followed by the sequel Sarkar Raj with the same actors.

Though there is still lack of confirmation about whether Balkadu is indeed based on Balasaheb Thackeray’s life , the film is sure to attract people in Mumbai. Actors Umesh Kamat , Neha Pendse and Prasad Oak are playing lead roles in the movie which will release on 15 January.

Though many films have adapted the political scenario in Mumbai as its theme, it will be the first time that his life will be depicted on screen.