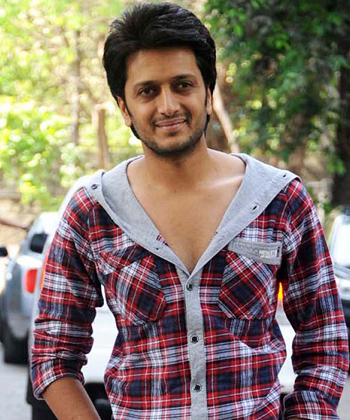 Ritesh Deshmukh celebrates his Birthday today on 17 December. The actor who began his career on a modest note , has made a mark not only in Bollywood but also in Marathi films. Belonging to a family of politicians, Ritesh was written off as a flop star for many years, before he showed his talent in comedy. The actor struck gold with his performances in movies like Hey Baby, Houseful and Houseful 2. Masti and Grand Masti are other good works by the actor.

The year 2014 was an important one for Ritesh both professionally and personally. Not only did he deliver great performances in Ek Villain and Lai Bhari, Lai Bhari became the highest grosser ever in Marathi films. In Ek Villain, for the first time, Ritesh got a role that did full justice to his potential. His role of a serial killer in the film won him appreciation. Lai Bhari is Ritesh’s home production and it brought huge returns for the producer. Lai Bhari was a great success for the Ritesh , the actor and the producer. Early this year, his production , Yellow got critical success and won three national awards.

To add icing on the cake, Ritesh and Genelia became parents of a baby boy in November. The jovial actor celebrated the arrival of the new member with friends and family.