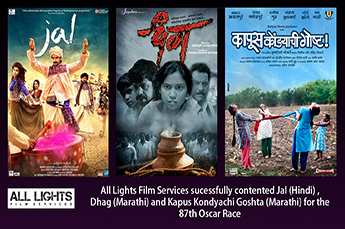 Marathi films are much acclaimed for producing movies on relevant social content. Once again, it is turn for two Marathi films to race for the Oscars. The 87the Academy awards , to be held in the coming February, has released the list of films which will be shortlisted for the Best Picture Category. This list has 323 films in all from all languages and cultures. In a matter of immense pride to Marathi industry, two films that released this year have got a place in the list. The films are Kapus Kondyachi Gosht and Dhag. Both the films have won national and international awards in various categories.

The director of Kapus Kondaychi Goshta , Mrinalini Bhonsale was elated to know that her hardwork has paid off in such a nice manner. She stated , “Oscars was never on my agenda. Belonging to a non filmi background, I was least aware of the manner by which films are selected for awards. Thanks to a friend’s advice , I sent my film for selection. “

Kapus Kondyachi Goshta has Makarand Anaspure, Samidha Guru and Bharat Ganeshpure in lead roles. Dhag , on the other hand is directed by Shivaji Lotan Patil and it stars Usha Jadhav, Upendra Limaya and Nagesh Bhonsale. Both the films bagged awards at the State, National and international levels.