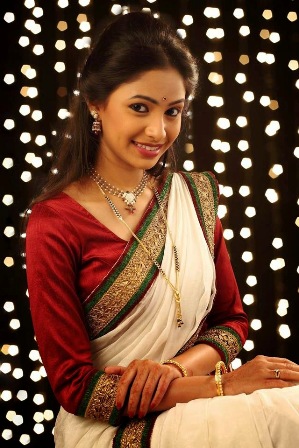 Sayali Deodhar is among the upcoming name in small screen in Marathi world. She hails from Pune wherein she was born and brought up at. She did her schooling from Pune, while doing her college from the known institute Abhinav Kala Mahavidyalaya. After her doing her education she headed to Mumbai to pursue her dreams of acting as she was very much active in cultural activities and creative works while being student in her school or college days. In fact, with all these activities, she made her mind long back to make her career in the creative world. So, the decision to head to Bombay was inevitable.

Though she aspires to become a star in B Town one day, however, happy doing roles in TV world in the Marathi Small Screen industry. When she reached Mumbai, she had to struggle a bit to get the role in Marathi TV world. Soon she got the TV serial called Julun Yeti Reshimgathi wherein she played the character of Chitra that made her popular. Thanks to her decent character that she played in it, which helped her to get another called Lek Majhi Ladki, which is aired at Star Pravah.

Soon she got the chance to act in M Town movies with smaller roles including Blackboard and Miss Match.  She also was seen in the role of an anchor in the popular TV show called Mandal Bhari Ahe. Talking about Sayali Deodhar personal life, she is still single and not dating one as she knows she is still a novice in the acting world therefore is focusing over her acting world.