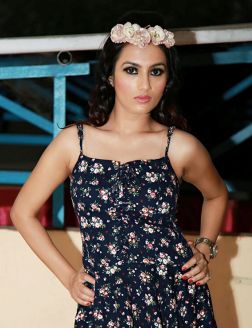 Saya Kashid is an actress, singer and dancer. She was born on 28th June 1994 in Mumbai and raised in this city only. Her body measurements go this way 36-28-36. She has acted in a number of formats including TV, short films and regional films.  She did her schooling and college from Mumbai itself, while her interest in acting started when she used to remain at the forefront on a number of social and cultural activities. Soon she tried her luck in the acting world and it came out for her making her debut in the movie.

Talking about the films, she has done movies like City crime and Hu tara Ishq maa both the films falls under M Town. Besides, she has also done a number of short films, which include Door of Hope, Wrong turn, Chetkini, Jaat and Dhagala lagali kal to name a few. She loves to be active on social media hence you would often see her very active in social media platforms like Twitter and Facebook wherein she loves to share her different pictures and communicate with her fans and followers.

Talking about her personal life, she is very much single and not dating anyone. As per the lady, she is now focusing on her career and has big plans right from doing several TV shows to big time Bollywood movies. However, she says it’s just her beginning, which seems to be modest at the moment but would increase in the passing days in the coming future for sure.