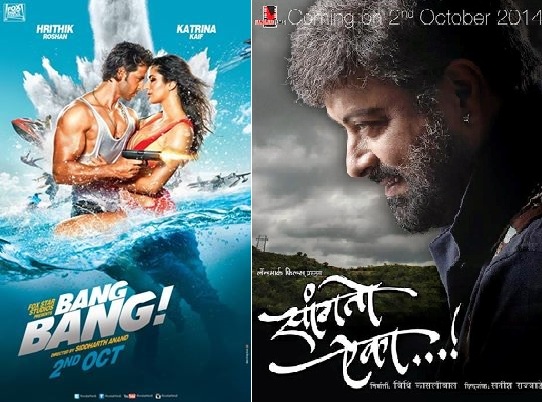 Satish Rajwade ‘s much ambitious film Sangto Aika is due to release on the 2 October. The film that has Sachin Pilgaokar, Sanskriti Balgude and Pooja Sawant in the lead is written by Parag Kulkarni. The film is a thriller but it also incorporates many social issues. Sachin Pilgaokar plays the lead role who is a stand up comedian who is charged with a crime not committed by him. How he comes through the emotional and social upheavals in his life is the film all about.

Interestingly the release date of the film coincides with that of Hrithik Roshan and Katrina Kaif starrer Bang Bang. Bang Bang, the trailers of which are getting record breaking number of likes on the web is all set to thrill the audience on October 2. Satish Rajwade, the director of Sangto Aika recently stated that he is not at all worried by the fact his film releases opposite the mega starrer Hindi film that leaves less chances for his film do well. The director is confident that his film will not fail to attract audience despite of the glamour attached to Bang Bang. The director is all praise for his cast that has given its best and says that the audience is wise enough to make the choice when it comes to a good film.