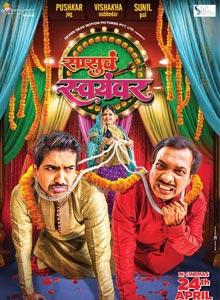 Sasucha Swayamvar is the latest Marathi movie that is expected to be released on April 24th 2015. It is Seven Seas Motion Pictures Private Limited that is the banner under which this movie is produced and the producers are Sameer Parab and Santosh Parab. The movie has been directed by Omkar Mane, the debutant director, who is also credited with writing the store as well as its screenplay. It stars Teja Deokar, Pushkar Jog, Vishakha Sarpotdar, Satish Tare, Jaywant Wadkar, Vijay Chavan, Sunil Pal (popular standup comedian) and Bhargavi Chirmule as guest appearance. It is a romantic comedy movie, which according to its director is sure to be enjoyed thoroughly and entertain the Marathi cine-goers.

The entire team from this move had celebrated ‘Sasu Day’, a unique way of campaigning for its promotion. These days the process of movie making simply does not stop at last ‘cut’ or completion of the post-production work. The fact is that film promotions are said to have gained immense importance and producers are likely not to ignore it. Also, each team tries to think something unique and to derive ideas out of the box for creating enthusiasm in regards to the movie, until its release.

There are numerous occasions celebrated across the globe like Valentine’s Day, Rose Day and Friendship Day, etc. This movie has come up with a unique, interesting and novel idea of ‘Sasu Day’ (Mother-in-law day) at the launch of their trailer event. Generally at trailer launches, songs are said to be played on the AV. However, Sasucha Swayamvar had something different in mind and had put in live performance using dancers to dance to the combo songs of the movie numbering four, while bringing the movie’s ‘sasu’ in a Doli on the dais. The event also witnessed few well known Marathi artists to be invited to this grand occasion.