Sanjay Dutt enters the Marathi Film Industry with “BABA” as a Producer along with Blue Mustang Creations; “BABA” is set for release on 2nd August 2019 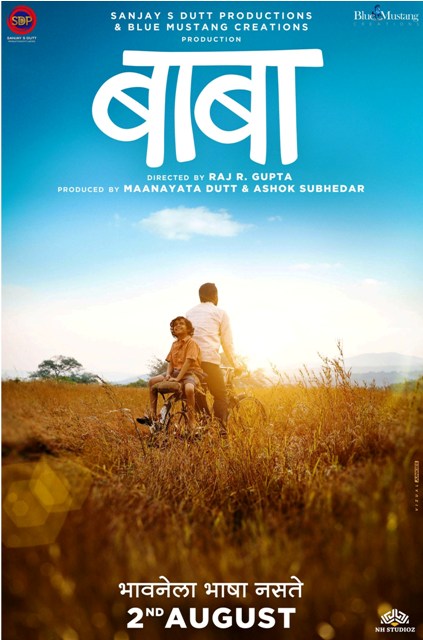 Popular and well-loved Super Star Sanjay Dutt and his wife Maanayata Dutt have started their journey into the Marathi film industry, as producers with their first film – BABA. The film is co-produced under their banner Sanjay S Dutt Productions, with Ashok and Aarti Subhedar of Blue Mustang Creations. Blue Mustang Creations have earlier produced “Bucket List” starring Madhuri Dixit in her first Marathi film.

The First Poster of “BABA” was released today by the Producers and the movie will hit the silver screens on 2nd August 2019.

Confirming the news, Sanjay Dutt on his twitter account says “Dedicating our first Marathi Film BABA to the Person who remained Steadfast in my life through everything! Love you Dad

Maanayata Dutt tweets “Dedicating our 1st Marathi Film BABA to the one and Only Sunil Dutt Saheb, whose rock solid support always enhanced our Confidence!

Ashok Subhedar of Blue Mustang Creations says “BABA” is a story written by Manish Singh – Baba is beautiful story of a father and his son. Set in a scenic village in the lovely Konkan district of Maharashtra, this is a story that will resonate with every age group, for its simplicity and innocence.

Raj  R. Gupta, the Director of ‘BABA” says “I truly believe emotions have no language and this has been beautifully conveyed by the actors in our film. It is a bittersweet tale of how a family strives to stay together despite all odds.

Dedicating our first Marathi film “BABA” to the person who remained steadfast in my life through everything! Love you Dad.#BabaOn2Aug – produced under the banner of @SanjayDuttsProd & @bluemustangcs
Directed By: @RAjRGupta2 pic.twitter.com/Ktg9fPQ1DQ