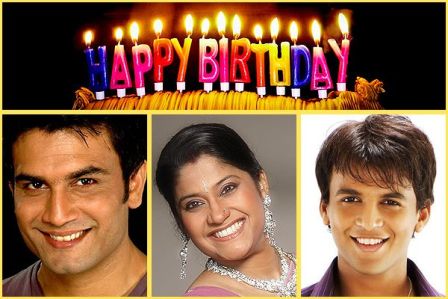 Renuka Shahane and Sharad Kelkar are celebrating their birthdays today. Both the actors are having great birthday bash with close friends and family. Many fans and followers wished the actors on the day through social networking site. Renuka responded by thanking her fans. She reportedly had a private celebration at her house with close finds and family. The actress who turns 48 today was extremely grateful for her fans who wished her on her birthday.

Sharad Kelkar on the other hand posted his pics on a social networking site. The actor, who turned 38 today, was seen blowing the candles with his baby girl and wife and mother. He also added that he was elated to have the three important ladies in his life besides him on this special birthday celebration. Sharad’s wife Keerti Kelkar is also a television actress. The actor who recently tasted success with the Rithiersh Deshmukh starrer film Lai Bhari also took the opportunity to thank his fans for the well wishes they had conveyed to him through the network. Sharad had also played the role of Deepiak Padukone’s brother in the film RamLeela.

Renuka will be seen in a bahu ‘s role soon. The actress who won hearts by playing an adorable daughter in law in the film Hum Apke Hain Koun , will play bahu again in the serial Kabhi Aise Geet Gaya Karo.