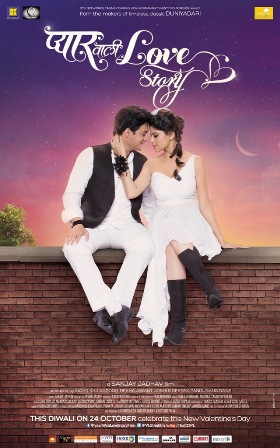 The stage is getting set to witness the grand release of the much awaited Marathi movie pyar wali love story. This Deewali, the movie buffs from Maharashtra can further entertain themselves, once the movie hits the cinema halls tentatively on the twenty fourth of October.

The movie that can be categorized to be a romantic one as for its genre is jointly financed by reputed producers like the “Cinema Company (I) Private limited” and the “Dreaming 24/7 Productions STV network (pvt) limited. The movie shall witness the casting of Swapnil Joshi, Urmila Kanitkar-Kothare, Sai Tamhankar and Nagesh Bhosale, apart from Sameer Dharmadhikari and Upendra Limaye, in its various lead roles, under the direction of Sanjay Jadhav. Music for this film had been directed by Pankaj Padghan, Samir Saptiska and Amitraj.

The audience can expect the same of the twist and dramas in the dialogs and the overall screenplay that had been written by Arvind Jagtap. The action lovers can expect those mesmerizing stunts from Kaushal Moses. Umesh Jadhav, as the choreographer of the movie, is optimist to drag the audience to the dance floors with those of his magical postures and grace.

As per the director, the film shall be a delight to the audience amidst the festive canvas. Special attempts had been made to shed off that extra body fat from the screenplay that shall ensure that the movie do not gets lost in between sub plots within, while they team had taken extra care to retain the charms and appeals of relationship, around which the film revolves.

The entire crew team is optimist to drag more and more people to the cinemas subsequent to its release and they can be assured of getting the value of their money returned. Just, few days to go and the countdown begins!!

Review : Marathi Movie Guru Purnima is a Love Story But With a Twist