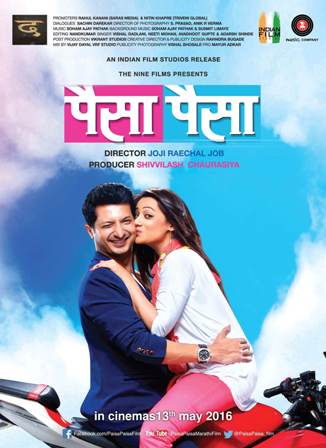 The Marathi movie Paisa Paisa happens to be a thriller, which is directed by Joji Raechal Job and is produced by Shiv Vilas M. Chaurasiya, which is done under the banner of The 9 Films Production. The music is composed by Soham Ajay Pathak, while the dialogue, story and screenplay is carried out bySachinDarekar. The film has SachitPatil, Spruha Joshi, MilindShinde and AashishNewalkar in the lead roles, while PushkarShrotri and DeepaliSayyad in the supporting roles. The film is released on 13th May 2016.

The film revolves around the character, which is kidnapped and then the ransom is all set for mere ten thousands rupees for some specific reason. So, how and when this ransom would be paid and the things happen the next would be caught at the film. As the film happens to be a thriller, you can find a steady pace in terms of story, which happens to be good. The trailer gives the precise idea about the film making it intriguing in the media for the audience. Stay connected with us to get more about the film.