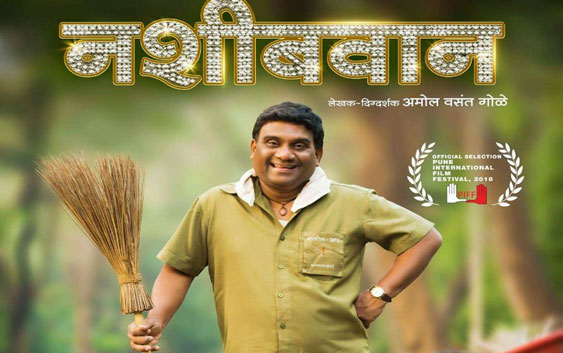 Movie : Nashibvaan
Director : Amol Vasant Gole
Star Cast : Bhalchandra Kadam, Mitalee Jagtap-Varadkar, Neha Joshi, Atul Aagalaavey, Yatin Karyekar and Jaywant Wadkar
Producer : Amit Naresh Patil, Vinod Manohar Gaikwad, Mahendra Gangadhar Patil and Vidhi Kasliwal
Production Studio : Flying God Films and Giri Media Factory
Genre : Drama
Story : Uday Prakash (Based on ‘Dilli Ki Deewar’)
Screenplay and Dialogues : Amol Vasant Gole
Cinematography (DOP) : Amol Vasant Gole
Rating – 3.5
Plot
The film is based on the story of Uday Prakash called Dilli Ke Deewar. The film talks about the way destiny changes the life of a person regardless of the background he or she has. The film has the story of Baban who happens to be a sanitation worker at BMC, one day he finds a treasure and soon his life changes. So, he takes his life is interesting to explore in the nearby cinema.
Review
A small time worker in a Mumbai city getting a treasure and life changes then, is not a new story though. However, the way things follow changes in the film. The makers with this film has addressed to the life long question, there is no end to desire and how much land does a man need a famous story from Leo Tolstoy. The makers are able to successfully able to this pertinent issue in a subtle way. For this they need to thank the characters played by the lead actor called Baban. He and his wife has carefully showcased a decent performance giving an edge to the film. This has given an edge to the screenplay of the movie as well that has garnered a good interest giving tough competitions to many hit and big time movies.
The first part of the film went smooth, however, in the second half, the loses the grip with a couple of sequence going unconvinced. But the climax in the film gives a good surprise to the audience. The fiction in the film was dealt with a decent amount of cinematography. Thanks to the competent directors like Amol Gole. Most of the performances of the lead actors in the film seemed coming natural and straight. These include all the actors like Bhalchandra Kadam, Mitalee Jagtap , and Neha Joshi and do not forget the supporting roles like Rajesh Shringarpure, Yatin Karyekar, and Tejpal Wagh to name a few. Lastly, the music of the film too went fine and so were the technical stuff like editing and other things.

This is not a comedy drama but a story of genuine message. Although it created some instant humor in it, thanks to the witty and nicely written dialogues. But overall speaking the film seemed okay and can be a good watch in any weekend or weekday schedule.
Share