Mrinal Kulkarni and Kishori Shahane give each other cold shoulder 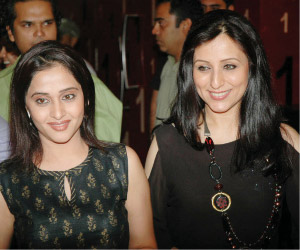 Mrinal Kulkarni and Kishori Shahane recently came under the same roof in the wedding reception of Ravindra Mankani’s son, Rohan Mankani. Both are accomplished actresses in marathi and it is after a long time that the two were spotted together. But unexpectedly there was no courteous greeting or exchange of Hello between the two. In fact, on the contrary, the two gave each other cold shoulder. Exchanging greetings seemed very far seeing the cold vibes that flew between the two. Both the actresses looked gorgeous in evening colors. They were the star attractions of the evening.

Actresses can never be good friends. That is an old saying. Such incidents make you believe in these sayings. Kishori and Mrinal avoided each other intentionally and made all efforts not to be around each other or even to make eye to eye contact with each other. In the reception that was splendid and extravagant , these two chose to maintain distance from each other and behaved coldly to each other. Interestingly, when one of the reporters asked one of the actresses to pose for a photograph with the other. The reaction of the actress was surprising one of refusal. Well, discomforts and grudges are common in the cine industry. And apparently actresses are never really good friends. That is all we can say.