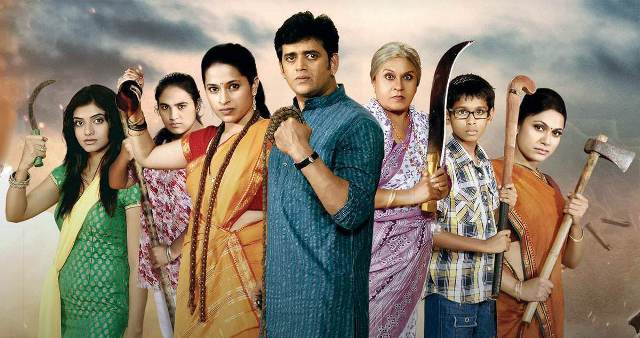 When a Bhojpuri superstar makes an entry in Marathi films, what would you expect from the film? There has to be the typical masala to cater to the audience’s choice. The right amount of action and just the right touch of drama. Ravi Kishan starrer Madhyamvarg has all these ingredients in the right amount. Ravi Kishan , the superstar of Bhojpuri films plays the main lead. Sidharth Jadav, Anant Jog, Nayana Apte, Sujata Joshi, Kashmira Kulkarni are other actors in the film who play significant roles. It is about the middle class people in the Indian society who are treated badly by the upper class people and also suffer exploitation at their hands. These people , who are mostly well intentioned are mistaken by the higher class to be after their money. The struggle of these people amongst themselves , their problems in life and their aspirations and dreams – all are depicted in the movie with the help of different characters who resemble a middle class person in real life. As far as the characterization goes, the film does not disappoint but we wish the story had some novelty in it. The story of their struggle against their exploiter is quite old. There were always such stories in Indian cinema that was about the responsibility of the Son for the Family and the resulting crisis in life. It is disappointing that that with actors like Sidharth Jadav and Ravi Kishan, the filmmakers could not do anything better.

Action is a must in a Ravi Kishan film and the script has rightly incorporated this element for his fans. Sidharth who plays the police officer is also given a potential role, pivotal to the film. The ladies Nayana Apte, Sujata Joshi and Kashmira Kulkarni are also aptly placed in the script. But it would be surely better if the characters were little less aggressive.

The script has lots of loop holes. The direction is careless at places but is nice overall. Music by Salil Amrute is tolerable.

This is not a film you would like to watch for a nice weekend. Except only if you are a Ravi Kishan fan. Apart from the performances of the lead actors, the film offers nothing interesting.

Mrinal Kulkarni and Kishori Shahane give each other cold shoulder